What else does Richard do?

Aside from performing magic, Richard regularly acts as an adviser or coach for television, theatre and theme parks whenever magic is required. Being a schooled actor Richard is also often seen in TV commercials, soaps, series and dramatic reconstructions. Richard is the owner of bespoke fashion label STKR, a high quality handmade clothing label, manufactured in Europe using only the best fabrics and materials. Under the supervision of Richard himself, clients get to design their own high quality fashion.

Why are there no photo's / video's of clients and events here?

Privacy is of the utmost importance to Richard as well as his clients. So you won’t find any photo's or video's on this website or on any of his social media accounts until explicit permission has been given. The same goes for anything that Richard might see or hear at the events he will be performing at. Richard will never talk or disclose anything to third parties, guaranteeing his clients absolute privacy. And who better then to keep a secret? That’s right: a magician!

but is surely one of the world’s top magic performers!"

With performances in 18 countries worldwide over the past 25 years Richard has truly made an international name for himself receiving nothing but critical acclaim. If you like magic, chances are you have heard his name mentioned by lifestyle columnists or seen his picture in society pages of glossy magazines.

Based in the Netherlands but quite the regular in Dubai, Germany, America, Spain, the United Kingdom and Belgium, Richard’s client list stretches as far from A-list celebrities, Fortune 500 companies to royalty.

With his upcoming international tour schedule and his magic television show aired in over 80 countries it is unlikely that Richard Stooker will remain a secret for very much longer!

Richard has earned the reputation of 'V.I.P. Magician' because he doesn’t seek publicity or needs to have his name announced everywhere he goes. Instead he works mostly on referral due to the incredibly private and often high profile nature of his clientele.

His performances draw on century’s worth of magic theory, live theater experience and his utterly unique style of audience interaction that has over the years become his trademark. Richard understands how much his clients value excellence, world-class entertainment and discretion. Every show is tailor made according to the client's specific wishes, ensuring the success and memorability of any event.

Whether it is an intimate surprise wedding, a fundraising benefit, a corporate party or a product launch: Richard's participation will always enhance the experience and will never detract. 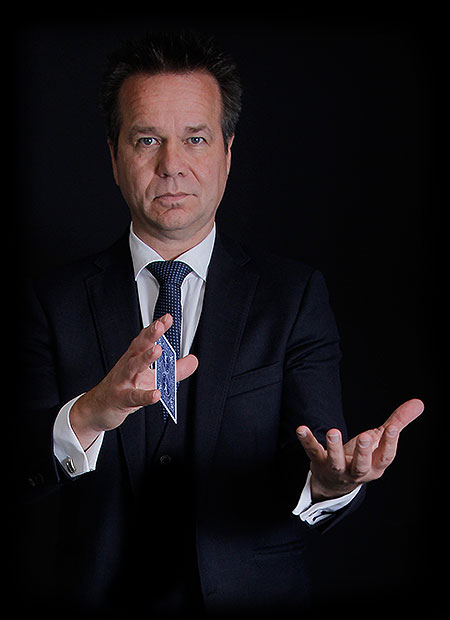 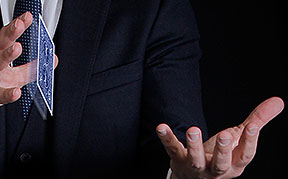 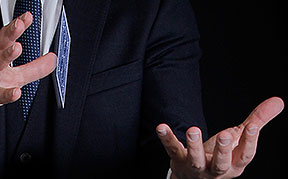 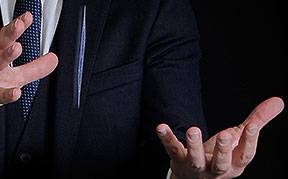 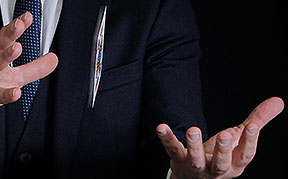 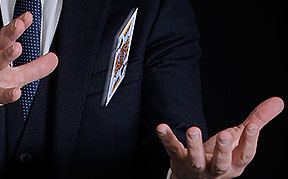 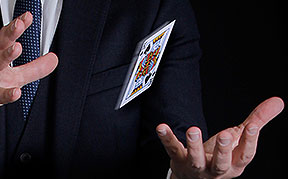 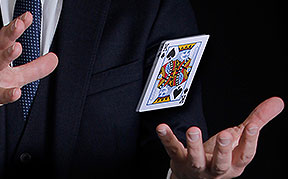 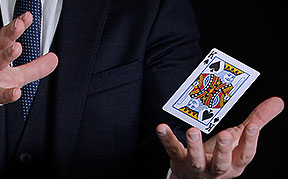 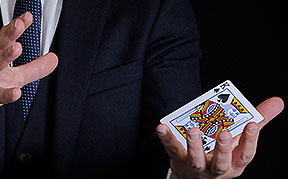 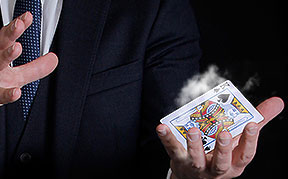 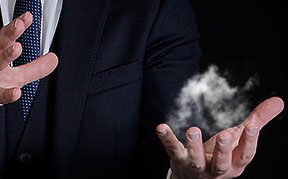 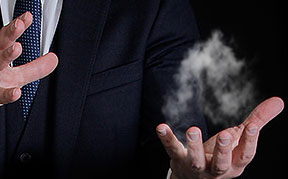 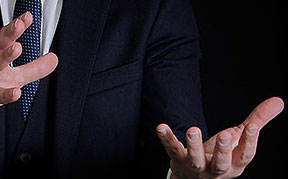 CAN RICHARD DO FOR YOU?

Illusions of the Mind

Richard masters an incredible amount of different forms of magic. Whatever type of event or audience, whatever form of magical enrichment you seek:

Richard will always prove to have been the absolute perfect choice for it!

Richard is a master at Illusions of the mind & psyche. Is he actually reading your mind like some magicians claim to do? Of course not. There is no such thing. It is a trick based on a combination of an old form of Neuro-Linguistic programming and mild hypnosis. Will it look and feel like Richard can read minds? Beyond the shadow of a doubt it will!

Whatever cards you think Richard is holding, no matter how great you think the cards in your hands are; you will never be able to beat Richard. Like a professional card con-artist Richard will fool you time and time again. You can’t trust him. The only thing that you CAN trust in is that you will never win!.

Everyone has seen traditional magic tricks. Things disappear, reappear; we have all witnessed it hundreds of times. But Richard reinvents all of these classics and presents them in an exciting and new manor that will truly amaze the most critical of audiences!

Magic is extremely flexible and can been deployed at any type of event! Over the past 30 years, Richard has performed on any type of event imaginable. Private Parties like Bar Mitzvahs, Weddings Diwali and Eid al-Fitr. Events, Congresses, Exhibitions or Seminars: Richard will make each and every event a celebration to remember!

With performances at royalty and A-list celebrity weddings, Richard is one of the most sought after Wedding Magicians. A performance by Richard guarantees that extra ‘touch of magic’ to the most important day of a young couples life. Close-up magic is ideal for any wedding celebration. Richard will mingle with your guests, performing illusions right in front of their eyes.

Richard is widely recognized as a leading exponent in trade show infotainment. A uniquely created magical presentation with sophisticated close up magic and illusions for your exhibition stand it will surely stop delegates in their tracks and deliver your message. There is one golden rule in trade shows: Maximum Exposure = More Leads = Maximum Returns!

Richard is highly respected in the conference world and will boost your event!

To prevent the decline of energy levels after listening to intensive, often dry, lectures for a long time, Richard can help make sure energy levels go way back up again in order to be able to keep absorbing all the information presented. Please feel free to ask about the possibilities!

Have Richard perform duty as your host for the day, introducing each keynote speaker, summarizing key points and maintaining energy levels throughout your delegates’ experience. If you are looking for something different: Richard is widely regarded as one of the leading energizer entertainers today!

Richard is a leading corporate cabaret magician. With your guests relaxing after dinner, they will be entertained with both magic and mind reading. His sophisticated cabaret show with amazing magic, incredible illusions, baffling mind reading, comical audience participation and of course a big magical surprise at finale will draw both giggles and gasps. Ideal for conferences, annual dinners, private parties, award ceremonies or any event in need of something special to bring the evening to a memorable and spellbinding conclusion.

Introducing a new car, television, perfume or logo? Searching for an alternative way to advertise your new product? Why not do it with magic that will surely impress your clients? Richard will tailor make you a presentation like no one has ever seen before. Tell him your ideas and he will make it happen!

Want to learn magic? You can!

Is performing magic and mentalism just for people with special powers or can everyone be taught this beautiful craft? In his workshops Richard allows you a glimpse in the world of magic. The workshops are fully interactive so your clients/employees will have to work hard to get the tricks working. Just think of how much fun everyone will have performing magic for colleagues! 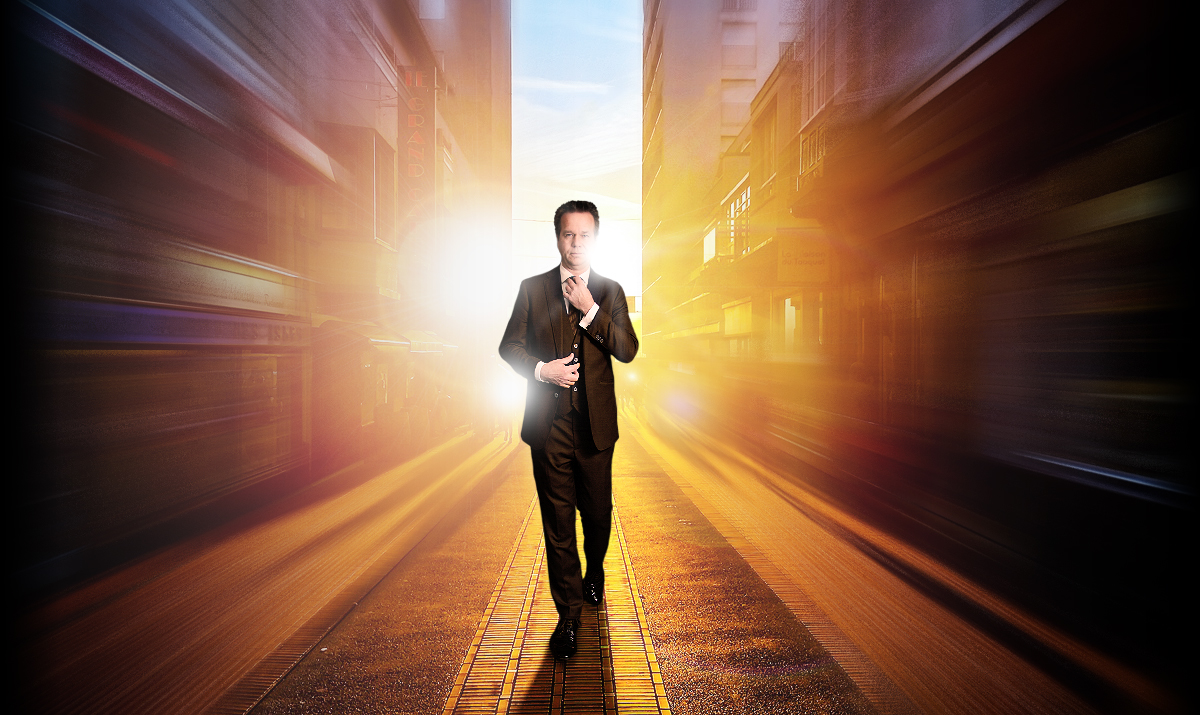